What would you do if your first love is at 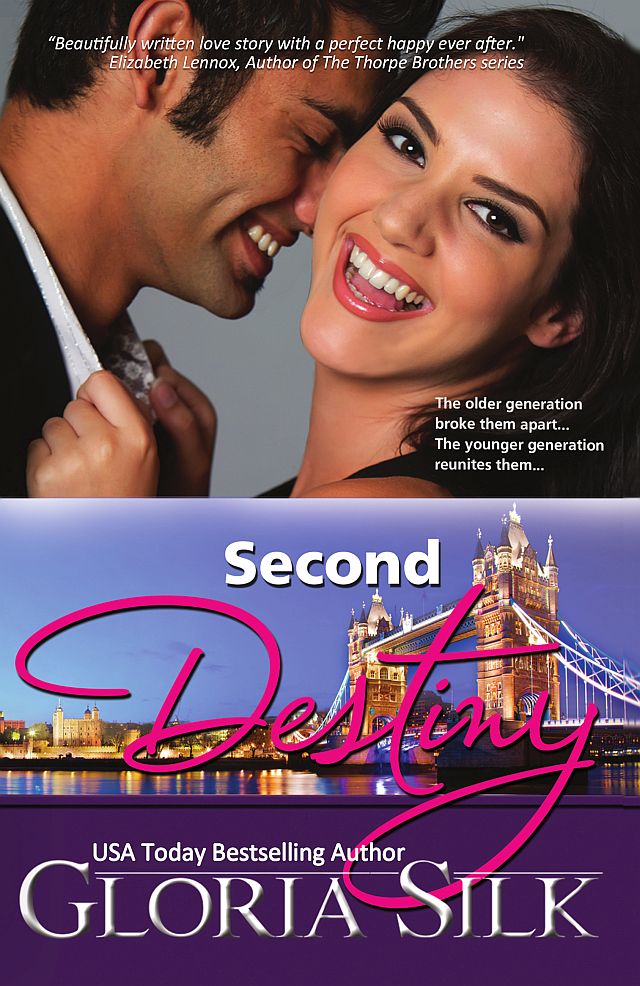 your door on the same day that you find out your husband has been unfaithful?

Fate brings Lia’s first love, Devraj Shah, back into her life on the same day she discovers her husband has been cheating. Will she resist the strong attraction to the charismatic tycoon and forge her independence? Can they put their past behind or will their intense passion endanger everything in its path?

For each download and sale of any Gloria Silk’s books, 20% goes to Breast Cancer Research. Read here why Gloria Silk is committed to this.

The Older Generation Broke Them Apart…
Lia Abraham gave up everything for her family and culture—art, autonomy and even self-worth. Worst of all was the sacrifice of Bollywood-gorgeous, idealistic Devraj Shah, when Lia caved in to pressure from both their families. She broke her first love’s heart by marrying the “right” Jewish man.

The Younger Generation Reunites Them…
Nineteen years later, minutes after Lia demands a divorce from her cheating husband, her world turns upside down again; Devraj is at her door. His nephew and Lia’s feisty teenage daughter are repeating history. They’re in love, but the now reserved, enigmatic Devraj is dead-set against the couple’s marriage plans. He is convinced Lia’s daughter will ultimately reject his nephew the way Lia had rejected Devraj.

After years of feeling caged in a loveless marriage, Lia embraces her newly found freedom, and her resurgent passion for Devraj is irresistible. Once again, she surrenders to the true love of her life, but their affair re-ignites opposition from both families. Will Lia’s second chance at love again destroy her loved ones and her dreams?

Torn once again between her love for Devraj, her family responsibilities and her need for true independence, will Lia choose duty over the desires of her heart?

For each download and sale of any Gloria Silk’s books, 20% goes to Breast Cancer Research. Read here why Gloria Silk is committed to this.

Something was wrong but Lia could not put a finger on it as she glanced around the long dining table at her in-laws. Her ever-silent father-in-law, Jonathan was nursing his third brandy since their arrival. Nothing new there.

The residual smells of Grace’s famous matzo ball soup, with its swirling rainbow of grease reflecting the chandelier lights, intermingled with the fresh yeasty challa rolls her mother-in-law had baked, as she did every Friday night for Sabbath.

What I wouldn’t give for a bowl of curry at this moment. Maybe tomorrow she would order it with her girlfriends at their bi-weekly lunch date. But tonight routine and tradition ruled this ritual Friday night dinner in London’s suburban Oakwood.

Watching her two silent children Lia concentrated on being in the moment. The only sounds in the slightly oppressive, antique furnished dining room were the delicate clatter of cutlery against the plates and her husband’s response to his mother’s probing questions about his latest problems with his business partner. As usual, mother and son were the two centre stage entertainers, while the rest of them were their audience.

Lia observed Howard. Tonight he seemed even more distracted, obsessed, as always searching for bigger ways to promote his cosmetic-surgery practice, and still waiting to be recognized for his genius.

Nothing new here, either.

Studying his roast chicken breast through his designer glasses, Howard said, “Of course I want him out, mother. My solicitors agree that Tom’s got too unrealistic expectations of me, but I have a busy clinic to run.”

Grace expelled one of her loaded sighs. More questions and reluctant answers ping-ponged between them.

Lia was tired of these conversations, but at least no one expected her to contribute. Most of the time she felt invisible, but that freed her to observe everyone.

She had a busy, uncomplicated life, with a beautiful home and great friends. Her parents-in-law tolerated her well enough. Her children were healthy and for the most part happy.

If she had not pursued her art, it was her own choice, and she had made peace with it.

She swallowed the sudden lump in her throat and reminded herself to be more grateful.

Her husband of nineteen years may not be the perfect mate, but he was a good provider and, mostly, an indulgent father to their children.

Swaying her attention back to their children, Lia glanced at her ever silent thirteen-year-old son, Gabriel—nicknamed Gabe and sometimes Gaby—sat slouching beside her. Then Lia regarded Danielle who sat across from her.

This was where something was definitely wrong.

Her eighteen-year-old had hardly eaten much in the past few weeks. Tonight Danielle seemed extra moody and withdrawn. What was going through the med student’s mind, sitting with her head downcast?

Medicine seemed to be her passion, but she was not the talkative type if she did have any issues with her studies.

At least Danielle had not gone through with the tattoo or belly-piercing rebellion, Lia thanked God. Where was her funny, vivacious little girl who could not wait to spill her every adventure the moment she burst through the doors after school?

And would she ever resurface?

How could she help her daughter’s sombre demeanor, while the teen appeared to act like a caged animal, yet again wearing those dark, tight fitting clothes Howard disliked?

Lia realized she was again twisting her tight engagement and wedding bands around her ring finger as if they were a double noose. She picked up her fork.

Guilt seeped through her. Were her children noticing her growing discontentment? The English spring weather always brought it on, along with the memories of a lost love.

Danielle broke the momentary silence between her grandmother and father. “Daddy, I have something to tell you.” Those wide shining eyes were a warmer shade of her father’s blue eyes.

Electricity seemed to crackle in the air around Danielle.

“What, sugar-plum?” Howard asked just as Gabe reached across the table for another roll.

“Where are your manners, Gabe?” Howard did not raise his voice, but just glared through arctic-blue eyes. “Ask if you want something.”

Lia’s heart squeezed hard. Gabe’s stutter never bothered him when mother and son were alone. These days he spent almost all his hours in his room with his books and computer.

Picking up the basket, she held it out to him.

He shook his head. Putting down the basket, she discreetly patted his knee.

He did not pull away, but his expression made her question why she never stood up for him, or took his father to task. Oh, she had, after both children had gone to bed—or in the privacy of their bedroom when they had still shared one—arguing, reasoning with Howard, until she was emotionally exhausted talking to a human equivalent of a brick wall.

“Daddy, will you please listen?” Danielle’s voice broke through her thoughts.

Ever patient with his daughter, Howard glanced at her, resuming cutting his chicken with the precision of a perfectionist surgeon.

“I’ve met my Mr. Right. I’ve been seeing him for a year and I love him. I’d like you to meet him.” Danielle’s honey-gold bob framed her pale face. She sat reed-straight as if expecting an explosion or at least a rare shouting match. “Sanjay is of a different culture—”

At the mention of this familiar name, Lia’s airways seemed stuffed with hardening cement, choking the breath out of her.

“Sanjay?” Both Grace and Howard pronounced the name as if smelling something disgusting.

A warped sense of déjà vu settled over Lia, heat prickling under her arms, neck and up her face.

Danielle stared back at her father. “He’s of Indian background, but—”

“Danielle, are you out of your mind?” Grace demanded in her haughty over-British voice.

“Let me handle this, mother.” Howard continued glaring at their daughter. Wiping his mouth on his damask napkin, he stood up to his full height of five feet seven inches.

Lia could not move.

“You’ve been seeing him for a whole year.” His eyes narrowed slightly. “Why now? I thought we talked about everything.” Lia heard the tinge of betrayal.

“We do, but at first we were just friends, then it became more important and . . . I didn’t think you’d accept him because he’s not Jewish—”

“Glad you know your father so well.” He looked at Grace. “That was tasty, mother.” He thanked her as he thanked Lia after every meal.

He squinted back at Danielle through his glasses, his thinning oatmeal hair shone on his pinkish scalp under the chandelier lights. “This was in very poor taste, to come out with this nonsense at your grandmother’s Friday night table. Now you’ve ruined everyone’s dessert with this rubbish. I won’t get angry, but you’ll never see this person again. Or mention him. It stops now! End of conversation.” Although his voice was firm, he gave Danielle one of the smiles he reserved for his female patients, their best friend and beauty god promising to make them look younger, more beautiful or desirable again.

But as Danielle stared up at him with that brave expression, Lia knew it was far from the end. “No, Daddy. If you won’t meet him, we’ll elope.”

Lia needed water to help her constricting throat, but she could not trust her fingers to pick up the crystal water goblet. Had she not said almost the same words to her grandfather nearly two decades ago, about an intense yet fun loving—Indian—young man?

“Like your mother did after I married her?” He sneered. “At least that was only art, no loss to the world. But medicine’s not to be taken lightly, young lady.”

“I don’t care about medicine, never have, and I don’t want a marriage like yours.” Danielle almost shuddered. “I want a real marriage, real love, and I will get it.”

Fists by his sides, lips even thinner, Howard turned to Lia.

For the first time in years, he glared right at her, not through her. “Do you know anything about this, considering the background of this . . . this . . . ?”

“He’s nearly twenty-one, Mom. He’s hardly a boy.” Without glancing at her, daughter and father dueled with each other with the same challenging eyes. “Sanjay’s smart and kind and such a hard worker, Daddy. He’s doing his MBA, and then plans to join his uncle’s business—”

Howard’s hand shot up in front of him. “Spare me the details.”

Watching, Lia’s sense of déjà vu grew stronger and her chest felt overtaxed from ineffective, too-shallow breathing. Devraj had also been subtly groomed for his family business empire. Her memories were torture enough, almost distracting her from the crisis at hand.

“Why have you let this go on, Lia?” Grace asked, blinking profusely while holding her hand against her pearl-clad neck and cream cashmere sweater.

Before she could respond, Danielle said, “Mom doesn’t know anything about Sanjay.” She scraped her chair against the hardwood floors.

Teetering, it righted itself as if not daring to interrupt the drama.

Her chin jutted out in defiance, like Lia’s had so long ago. “I mean it, Daddy. We’ll get married with or without your permission. I’m old enough now.”

Unlike her mother, Danielle was made of stronger stuff. Her contradictory, secretive behaviour over the past few months made so much sense. Knowing exactly what she wanted, Danielle wore a cloak of confidence of someone who was unconditionally adored. Lia was proud of her daughter, yet feared for her happiness, knowing Howard too well.

This could not end well.

What’s Next from Gloria Silk?

Nobody’s Baby But Mine is now available.

If you enjoy Gloria’s books, let your friends know about them. If you review any of her books, let Gloria Silk know and she will send you her next novel free of charge.

First and Only Destiny Trailer